Selective serotonin reuptake inhibitors are a class of drugs that are prescribed to people suffering from depression or anxiety disorders. They are relatively safe and are the most commonly prescribed anti-depressants. They work by increasing the amount of extracellular serotonin in the body by inhibiting their uptake into the cells. 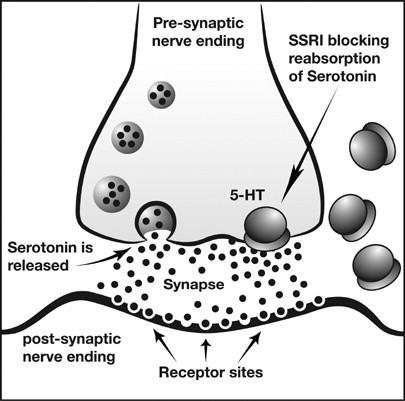 There are various studies that show limited evidence regarding the efficacy of SSRIs for depression. Studies show little to no difference in the efficacy between SSRIs and placebo for severe depression. Their efficacy in some patients with depression maybe more due to a placebo effect than the effect of the drug itself.

A recent study has found that in some patients, the SSRIs make the neurons hyperactive.

Salk Institute Professor Rusty Gage, the study’s senior author, president of the institute, and the Vi and John Adler Chair for Research on Age-Related Neurodegenerative Disease has his own theory regarding this. “This is a promising step toward understanding why some patients don’t respond to SSRIs and letting us better personalize treatments for depression,” said Gage.

Millions of people suffer from depression around the globe with many Americans suffering an episode of major depressive disorder (MDD) at least once a year. The rates of depression and anxiety are increasing worldwide with a subsequent rise in the number of suicides. Researchers correlate MDD with an imbalance in the serotonin signaling pathway.

A new study has found a possible reason why: The neurons in at least some of these patients’ brains may become hyperactive in the presence of the drugs.

“This is a promising step toward understanding why some patients don’t respond to SSRIs and letting us better personalize treatments for depression,” said Salk Institute Professor Rusty Gage, the study’s senior author, president of the institute, and the Vi and John Adler Chair for Research on Age-Related Neurodegenerative Disease.

Salk Institute Professor Rusty Gage, his colleagues at Salk and collaborators at the Mayo Clinic.

To observe the response of neurons obtained from each group of patients to increase extracellular serotonin levels.

Next, the skin cells of the two groups of patients as well as skin cells from three healthy control subjects were isolated. They then used stem cell reprogramming techniques to convert the skin cells into induced pluripotent stem cells (iPSCs), and then again turn them into neurons.

When serotonin was present, some neurons from those who didn’t respond to SSRIs had significantly higher activity compared to the neurons of healthy individuals or SSRI responders.

The human brain has seven serotonin receptors. Among them, two receptors: 5-HT2A and 5-HT7 played particularly important roles in SSRIs efficacy. When these two receptors were blocked, the neurons of non-responders were not hyperactive. These findings implicate that specific drugs targeting these two receptors could be a more effective alternative for depression than SSRIs.