Human growth Hormone (HGH) is a frequently used term today and although many people across the globe either take it or are considering doing so, it’s still largely misunderstood. Do you really need HGH? Is it even allowed to take HGH to bulk up and to look and feel younger? In order to determine whether you really need HGH or to get the most out of its use it’s crucial to learn a thing or two about it, right? The main purpose of this post is to provide an in-depth explanation of HGH, what it really is, and other important things you need to know.

A Comprehensive Lecture On HGH

Human growth hormone (HGH), also called somatotropin, is a peptide hormone secreted by the anterior lobe of the pituitary gland. The pea-sized pituitary gland is located at the base of the brain and it is considered a master gland in the body due to the fact that it produces various hormones that participate in various bodily functions. What makes HGH so significant is that it promotes the growth of basically all tissues in the human body, including our bones.

Somatotrophs, anterior pituitary cells, synthesize and secrete HGH. These particular cells release about one to two milligrams of HGH a day. The hormone acts through binding to the HGH receptor and it induces either direct impact or initiates the production of IGF-I (insulin-like growth factor I) which is the most important mediator of HGH effects.

Even though the use of HGH has become almost like a trend lately, the hormone has been studied for decades. Believe it or not, scientists in the past obtained HGH from human corpses in order to study it and it was even administered to patients who needed the treatment with this hormone. So, why did they use human corpses to obtain HGH? 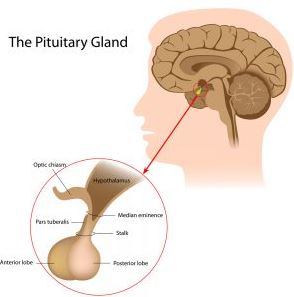 The first efforts to acquire the hormone for the treatment of growth hormone-deficient children date back to the 1940s. Initially, subprimates were used for this purpose for more than 10 years. Although scientists purified bovine and porcine growth hormone these preparations didn’t reach the required metabolic and biochemical activity mainly because the effects of this hormone are species-specific.

In 1956, scientists isolated growth hormone from the human pituitary for the first time. Yes, that’s when they started obtaining somatotropin from human corpses. That being said, the hormone’s biochemical structure wasn’t fully explored until 1972.

As the use of growth hormone in the treatment of children was picking up there was an increased need to establish an organization that would supervise these procedures. National Pituitary Agency (NPA) was founded in 1960 and between 1963 and 1985 it oversaw almost all growth hormone treatments in the United States. During this period 27,000 children worldwide and 7700 children with growth hormone deficiency were given HGH obtained from human cadavers.

In 1985, the FDA received reports which stated that four young adults who had been treated with HGH have developed Creutzfeldt-Jakob disease (CJD). CJD is a rare, degenerative, and fatal brain disorder that belongs to the group of diseases known as transmissible spongiform encephalopathies (TSEs). It is transmitted in three ways: sporadically, by inheritance, and through contamination. FDA and National Institutes of Health (NIH) reviewed these reports and connection between this disease and HGH was confirmed. This finding led to the suspension of the use of human pituitary growth hormone the very same year due to fears of further contamination. The goal was to prevent CJD in other children who have been receiving the treatment or, at least, were supposed to. Unfortunately, 26 people died from CJD which has effects that are quite similar to mad cow disease and Alzheimer’s disease.

The scariest thing of all is that there was no way to test for the infection in patients who have received HGH treatment. Basically, their lives turned into a horrifying waiting game not knowing whether they have the disease or not. At the time, patients lived in constant fear of experiencing symptoms of CJD.

Suspension of the use of human pituitary growth hormone by the FDA didn’t stop the efforts of scientists who still wanted to find a way to use HGH in the treatment of human growth hormone-deficiency and potentially other problems. Genentech, a biotechnology company, and Ely Lilly drug company had been independently working on new methods of manufacturing HGH, but not from subprimates and humans. They focused on recombinant bacteria. Basically, they inserted a gene coding to genetically modify bacteria and produced HGH. The result of this action was the transformation of bacteria into little factories that produce the hormone, but with a low risk of contamination. Drug Protropin, recombinant HGH, from Genentech was approved by FDA as a result.

The term somatotropin is often confused for somatrem. Two terms are used interchangeably as many people believe they refer to the same thing, but that’s not quite correct. So, what is the difference between these two terms? Well, somatotropin is the other name for human growth hormone that is secreted by your pituitary gland, as it was explained above.

On the other hand, somatrem is a synthetic form of the hormone; a biosynthetic single polypeptide chain containing 192 amino acids. Endogenous HGH, somatotropin, contains 191 amino acids, but in somatrem the additional one is methionine. In other words, somatrem is an analog of somatotropin which is naturally produced in the body. Analog is a term that refers to a substance or compound that is similar or mimics characteristics of the naturally-occurring compound or, in this case, hormone, in the body. This is why these two terms should not be used interchangeably.

Somatrem is created through the use of recombinant DNA technology. That’s exactly what Genentech did when they created Protropin. The main mechanism of action of somatrem is to stimulate linear bone growth and it has the potential to increase muscle mass, promote the growth of organ cells, and support the production of red blood cells. Somatrem is mainly used to address growth failure caused by different problems including malfunctioning pituitary gland. Bodybuilders use somatrem to bulk up and improve their physique and some people use it to lose weight, but these two uses aren’t recommended.

Now that we’re mentioning somatrem versus somatotropin, it’s useful to address yet another confusion in which both terms are often mistaken for somatropin. Somatropin is also a form of human growth hormone that has the same sequence as native HGH or somatotropin. As seen above, somatotropin and somatrem have a different structure. On the flip side, somatropin was created to have the same composition as human HGH. Due to the fact somatropin has an equal sequence as native HGH it is more commonly used in prescription drugs. A vast majority of HGH medications contain somatropin rather than somatrem. Some examples include Humantrope, Genotropin, Norditropin, Nutropin, Saizen, and others.

The FDA and HGH

Men and women who want to slim down or increase muscle mass often consider using HGH. Most people think it’s so simple, but the reality is much different. You see, HGH isn’t a dietary supplement that you can order online or buy in the drugstore. HGH is available with doctor’s prescription only and should not be used for any other purpose except for conditions that require treatment with growth hormone.

According to the FDA, HGH is the active ingredient in many human prescription drugs approved for marketing in the US under new drug applications. But, FDA-approved HGH can only be legally prescribed for the following cases:

Bearing in mind that many people use HGH for purposes that aren’t on the above-mentioned list and that celebrities use it to look and stay youthful, the FDA aims to enforce stricter rules that would put a stop to improper use of the hormone. Without an approved application, HGH products cannot be marketed in the US. They also explained that while some manufacturers may claim their HGH product is a dietary supplement that’s not the case. In fact, HGH is excluded from the definition of the dietary supplement act.

Unless you are diagnosed with a disease whose treatment could benefit from HGH then you don’t really need it. In fact, your doctor will probably refuse to prescribe HGH for some random purpose despite the fact that it may enhance muscular strength or promote weight loss.

Human growth hormone is vital for your health and wellbeing, but just like any other hormone, its concentration can go up and down. That being said, it’s entirely possible to increase levels of HGH in a natural manner. Here are some tips to consider:

Human growth hormone is secreted by the pituitary gland and it plays a vital role in our body. For decades scientists tried to find a way to treat various conditions with HGH and the use of biosynthetic version is FDA-approved today. It’s important to mention that HGH is only approved for the treatment of various conditions, it’s not a dietary supplement that you can buy without prescription to lose weight or gain muscle mass. If you do want to use HGH for these purposes you need to consult your doctor first rather than getting the hormone through unsafe routes.