Diverticulitis is an inflammation and infection of abnormal pouches in the colon, which are called diverticulums. The presence of diverticula in the large intestine is known as diverticulosis. Diverticulosis itself does not cause many symptoms, but when these outpouchings become infected, they can cause severe pain.

What are the causes and risk factors of Diverticulitis?

Diverticulosis develops due to weakness in the colonic wall resulting in an outpouching of the colon. Multiple diverticula can be present in a patient without any symptoms.

Diverticulitis, on the other hand, is hypothesized to develop due to higher pressures within the colon, associated with vigorous contractions. It is also associated with many risk factors, such as:

Diet, sedentary lifestyle, genetics, and certain medications’ use all lead to an altered microbiome in the colon. Diet also plays an important role in the development of bacterial stasis and fecalith, which further complicates the microbiota in the colon. All of this leads to altered microbial metabolism which affects the immune and hosts defense response. It also leads to impairment of mucosal barrier function allowing adherence of bacteria to the colonic wall. This causes the release of pro-inflammatory cytokines, resulting in inflammation.

What are the symptoms of diverticulitis? 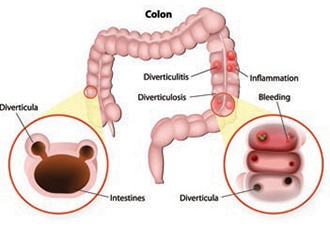 Diverticulitis presents with sudden-onset, lower abdominal pain, and bloody stool. It may also present with nausea, vomiting, and fever. Depending on the colon affected, the pain may be felt on the left (sigmoid colon) or the right (ascending colon) side.

In complicated diverticulitis, the bacteria may spread to the abdominal lining, and cause peritonitis. Or the fecalith or inflammation may cause bowel obstruction. Extreme cases may result in the formation of the fistula with other organs in the abdominal cavity.

How is diverticulitis diagnosed?

Diverticulitis diagnosis is made using a contrast-enhanced CT scan. CT scan of the colon may show colonic wall inflammation and the presence of diverticula. It is important to note that colonoscopy and barium enema, modalities very commonly used for diagnosis of colonic pathologies, are strictly contraindicated in case of diverticulitis due to the high risk of diverticular perforation.

After diagnosis, diverticulitis is classified based on their severity into different stages:

How is diverticulitis treated?

Antibiotic Therapy: Recommended antibiotics for diverticulitis are ciprofloxacin (Cipro), metronidazole (Flagyl), cephalexin (Keflex), and doxycycline (Vibramycin). Several guidelines recommend routine use of these for uncomplicated cases, however, there is not much supporting evidence. But if CT images show abscess formation, fistulas, or intestinal rupture, antibiotics are recommended routinely.

Dietary modifications: Dietary changes are recommended, and most patients are put on a low-fiber diet. However, there is no enough supporting evidence to prove that this can help treat diverticulitis.

Many researchers believe that a low-fiber diet just gives the colon an adequate time to heal, rather than help in the healing process. Some researches even claim that a high fiber diet can help prevent diverticulitis. However, none of these claims can be supported with enough clinical evidence.

Pain Management: Acetaminophen and anti-spasmodic are recommended for pain treatment. NSAIDs are related to a high risk of complicated diverticulitis and must be avoided in patients with acute diverticulitis.

Along with all these, it is important to provide bowel rest. In general, a patient with uncomplicated diverticulitis will be put on a liquid diet for 2-3 days, along with a low-fiber diet to give the bowel enough time to heal.

Surgical Interventions: Surgery is the only choice of treatment for diverticulitis complicated by an abscess, fistula, or intestinal perforation. The general approach to such cases is resection with primary anastomosis (a connection between resected parts of the intestine).

Read Also: Colorectal Cancer: Symptoms and the Latest in Screening

What are the complications of Diverticulitis?

Diverticulitis can cause many painful and emergent complication like:

Following any abdominal surgery, there is always a risk of adhesion and stricture formation. They are not exact complications of diverticulitis, but rather of the surgical treatment of diverticulitis.

A healthy diet and an active lifestyle can go a long way for the prevention of colonic diseases like a diverticular disease. It is important for individuals to pay attention to their health as not doing so has grave consequences. Also, appropriate use of antibiotics must be done, so as to prevent the development of antibiotic-resistant bacteria. Timely diagnosis is also crucial for diverticulitis.